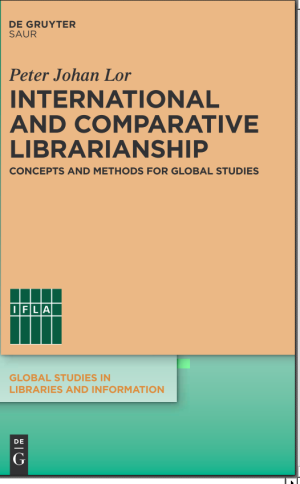 This is where I posted draft chapters of my book on international and comparative librarianship, International and comparative librarianship: concepts and methods for global studies, while I was writing it . The chapters were published here under a Creative Commons Attribution-NonCommercial-NoDerivs 3.0 Unported License.  The book has been completed. Date of publication is 17 June 2019. It will be launched at the IFLA World Library and Information Congress in Athens, in August 2019. The publisher is De Gruyter-Saur, Berlin. Publication details here, and here is the table of contents. You will be able to see (and buy!) copies at the De Gruyter-Saur stand at the Congress. 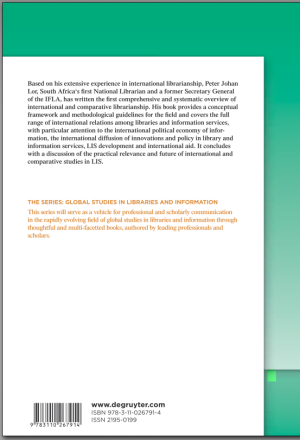 Back cover of Peter Lor’s book

Suggestions and comments on the book will be welcomed. I can be contacted at PeterJLor(at)gmail.com, or of course via comments on my blog posts.

At the IFLA World Library and Information Conference in August I was interviewed about the book. A brief YouTube video of the interview can be seen here.

In January 2020 Newsletter Editor Rebecaa Vargha interviewed me about my career and my book. The interview appeared in the IFLA Library Theory and Research Section’s Newsletter, February 2020, pp.3-5 which is available here.

9 Responses to The book

This site uses Akismet to reduce spam. Learn how your comment data is processed.